I have been brought up to believe that we should help those in a position less fortunate than our own, whenever we can – I credit this set of values with my the wonderful up-bringing I received from my parents, and the example set by my brother – who is a CEO of a group of charities in Cornwall, UK.   One of our core philosophical principles in Genuine People is role-modeling. So I’ve been keen to give back to the communities I have been involved with for a number of years, and it is a core belief in Genuine people.   All of our employees have a clause in their contracts to spend up to 3 days working with a charity of their choice. Fundamentally, this has to be a personal choice, and like our name – it needs to be a Genuine interaction to benefit a community we interact with. There are 2 examples provide on this website of recent work we have been involved with in Genuine People.   The reason we included these in our website (after much debate) is not to seek attention for ourselves, but to promote the charities and causes we believe in. We hope you will join us in helping support your communities in any way you can, and we recognize that many of you do this already. 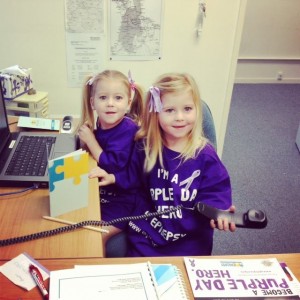 This is the most ‘Genuine’ community interaction I could personally have. I suffer from Epilepsy and have done all my life. For most of my life it has been controlled my medication. It still has an impact now on my wife, Nicky and my kids – but I’m proud to say I have accepted it now – I no longer try and hide the fact I have a condition (which I did for most of my career).

I have been working for the last 18 months with Frank Gouveia, CEO Epilepsy NZ on a pro-bono basis to provide any support and assistance I can to the charity. Did you know that 1 in every 12 families in NZ is affected by Epilepsy? But it is still widely misunderstood and feared in our communities. So our focus has been to help raise awareness of Epilepsy throughout the country, to remove any remaining stigma, and give confidence to those, like myself, that suffer from the condition – to go on, and be the best that they can be.

At Epilepsy New Zealand we often get non genuine people contact us offering their help and I follow up each one personally, so I recall when I first met Steve and the very point in our conversation when I realized there was something special about him which was different to some of the many people who contact our organization offering to help. At that meeting Steve said “I really want to help you guys and it would be easier for me to write a cheque, but I believe I can do more through using my experience, business skills and network”. To some this may sound fair enough, but to me these were very important words as they were exactly the words that I myself had used when I left the commercial world and choose to give my time to this charity many years prior. So in hearing this you can imagine that instantly the partnership with Steve was formed and now two plus years on we have worked together and achieve some fantastic goals, like the partnership with the BNZ in increasing awareness of epilepsy through their branches nationwide. The results for the organisation have been great, but most important the reduction of the stigma around epilepsy through this increase awareness has benefitted people with epilepsy tremendously. Thank you Steve 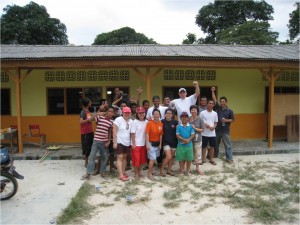 I was approached while attending a Kiwi Ball in Singapore, while we were living there – to see if I was able to do anything to help a group of abandoned children on the Indonesian Island of Batam. This was in 2009 while I was working for Hewlett-Packard. My involvement went from 2009 until 2011 and spanned the started of Genuine People.

Around 35 children ranging from 5 years to 16 years old had been displaced from other islands in Indonesia after the 2004 Boxing day Tsunami, and moved by the government to Batam. Their parents and relatives had left Batam progressively between 2006-2008, and these children had been left with a 70 year old Baptist minister and his elderly wife.

In partnership with the Baptist church in Singapore, I took my regional HR team over to Batam to see what we could do to help. Over the next 18 months, we asked HP staff, and our regional Executive team to provide funds to rebuild the house they lived in and the school they attended.

We also organised working parties to paint and decorate the school – I spent one weekend with many of my team, and my father – painting away in 35-37 degrees, when we were amazed to see the pupils themselves turn up and start painting as well. And eventually HP provided new technology to the school to create a unique computer lab in a very rural part of Batam – providing better opportunities for the children and their futures.

It just shows that the aftermath of many natural disasters continues long after the cameras have moved on. A truly unique, life changing project for all that were involved, and the work continues with volunteers spending time teaching English to the kids as a second language – travelling over from Singapore on a regular basis.

We work hard to bring our global experience and perspective to your specific business challenge. We listen to your requirements, and deliver solutions that work. Talk to us today